The Silky Gentle Cascade of the Baker’s Falls

I had done a shoe-string budget trip to Sri Lanka last year (April 2011) with a group of 8 friends. It was a 4 day trip with us flying to Colombo from Chennai and the total came to roughly about 13,000/- INR (233$) per head – airfare inclusive. That story is better saved for another day. (I seem to be setting a lot of future posts, but with no idea on how to complete them.)

So there is this friend of mine who is a travel writer and a blogger, and it was he who had organized this whole trip and planned the itinerary.

The 9 Kilometer trek through the Plains

On our itinerary was the Horton Plains National Park (named so in honour of the then British Governor General of Ceylon Sir. Robert Horton. ) in Nuwara Eliya District. Nestled between the foot of Thotapolakanda and Kirigalpottha mountains, the Plains are famous for its birds, specially birds endemic to Sri Lanka and more so endemic to the Horton Plains itself. One of the highlights of a visit to this park is the 9 KM trek through the park. This trek passes through 3 big attractions – the Worlds End, the Lesser Worlds End and the Baker’s falls.

The main attraction of the national park is the World’s End, which is a sheer precipice with a drop of nearly 3000 feet and the Lesser World’s End has a drop of about 900 feet. I must mention that the panoramic view from World’s End is absolutely spectacular and breathtaking.

The other attraction of the park is the Baker’s falls which is named after the famous hunter explorer Sir Samuel White Baker. I haven’t been able to find out if it was named to honour him as a prolific explorer and hunter who honed his skills hunting Asian elephants and Sri Lankan Sambars on the isle or because he discovered it. Legend has it that Sir Baker used to rest at this falls during his numerous expeditions.

A candid shot of a tourist enjoying the cold spray of the falls. Love the way the light plays through her hat onto her face.

This is one of the most beautiful falls in Sri Lanka ( I have seen only two – the other being Ravana Ella) and is not like one of those typical gushing waterfalls we are used to seeing. This falls is on one of the tributaries of Belihul Oya and cascades almost gently from a height of about 66 feet over 3 different elevations, thus creating a silky gentle fall that almost rolls off from 3 different shelves so to speak.

It is a bit of a trek for the non-active traveller, nonetheless worth every bit of effort spent in 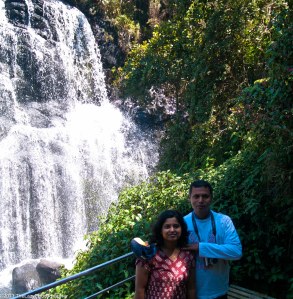 Couple of our friends posing The ‘Pose for the family album’ ! 😛

trekking down to the falls. Though bathing in the falls is explicitly banned, the more foolhardy adventurous tourists do go up to the foot of the falls to splash around. The more rule abiding ones stay close to the shore and satisfy themselves in the shallows, which itself is absolutely rejuvenating. The foot of the falls is surrounded by rhododendron bushes, trees, and other vegetation which combined with the cool mist from the falls gives the weary hiker a naturally cool and refreshing rest station!

Baker’s falls comes towards the end of the trek and is a refreshing and fitting end to a brilliant trek through the verdant plains of Horton.